A few months ago, I posted a stuffed bell peppers recipe that wasn’t SCD legal. Now that I’m on the SCD, I’d been wanting to modify that recipe. This afternoon, I did just that, and let me tell you, the stuffed bell peppers I made today taste 100 times better than my original recipe!

Just like my original recipe indicates, you’ll want to wash your bell peppers, cut the tops off, and remove the seeds and membranes. This time, I also kept the stems, instead of discarding them like last time. Place them in a pot of salted, boiling water. Boil for 7 minutes. When it’s time to remove them from heat and rinse them in a colander, the skins of your bell peppers should look shriveled up. This is what you want! Last time I made my stuffed bell peppers, the skins hadn’t wrinkled, yet, so the bell peppers were a little crunchy, even after being in the oven for so long.

Put your bell peppers aside to cool a bit and let’s move on to preparing the stuffing.

In a large nonstick pan, cook your ground turkey. Drain the fat in a bowl once the turkey has browned. Add a tablespoon of olive oil and saute your onions until they become translucent. Add the garlic, basil, oregano, Italian seasoning, tomatoes, cilantro, salt, and pepper. Add 2 cups of the tomato juice and stir your stuffing, so that it mixes well and the flavors distribute evenly.

On a side note, the stuffing obviously is enough for more than 3 bell peppers but that’s all I had on hand. I would guess this recipe could easily fill a dozen bell peppers total.

These stuffed bell peppers are ooey, gooey, cheesy, and delicious! I will definitely be making them more often in the future. I hope you try your hands at them. If you do, be sure to let me know how they turn out.

One of the most important factors for me when making a dish is whether or not it’s healthy and good for my family. Sure, we all need to indulge every now and then by having a cheat meal, but I tend to veer more on the side of healthy dinners, rather than unhealthy dinners. And, most of the time, what I make for dinner really does depend on the ingredients I have on hand. So, the quest was to come up with a delicious, but healthy, dinner. That’s when I decided to make stuffed bell peppers! Here’s what you’ll need to recreate these beauties:

OK, now let’s get started! First, you want to wash your bell peppers, dry them off, cut off their tops and remove the seeds. You can choose to use the tops but I decided not to. Then, bring a large pot of salted water to a boil and parboil your bell peppers in there for 5 minutes. This is an important step, as it really softens the bell peppers in a way that the oven won’t. If you skip this step, your bell peppers will turn out crunchy, so, be forewarned. 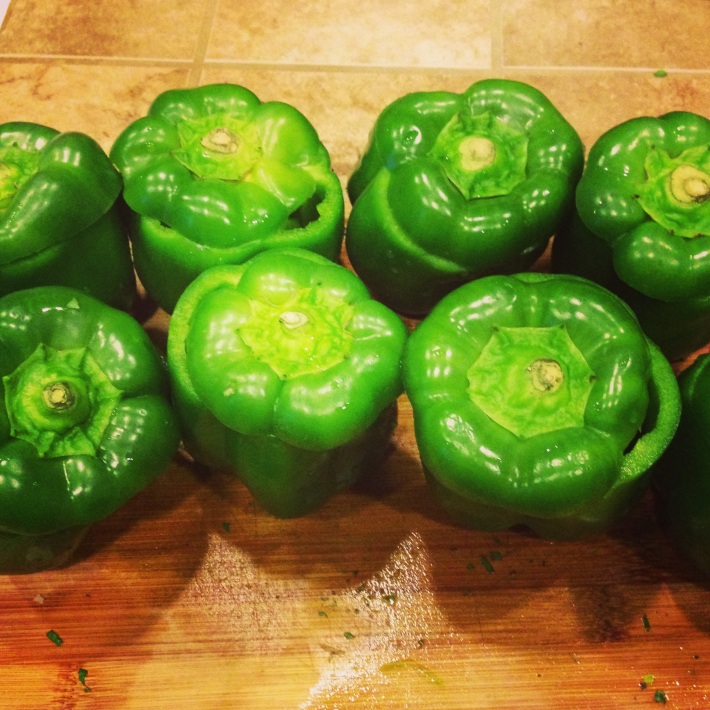 While the bell peppers are boiling, cook your rice. You can use a rice cooker or cook it on the stove, like I like did, since it’s a huge time saver. I used 3 cups of water for 2 cups of rice, salted the water, and added a tablespoon of olive oil. It took about 15 minutes for my rice to get fully cooked.

After the bell peppers have boiled, pour the pot of bell peppers inside a colander to drain. Remove with tongs (as the bell peppers will still be extremely hot), and pat dry with a paper towel. Set aside and let them cool slightly, while we move on to preparing the stuffing.

In a large nonstick pan, cook the ground beef. Drain the fat in a bowl to discard later. Add a tablespoon of olive oil and saute the mini bell peppers until soft, along with the onions, until translucent. Add the diced tomatoes. Mix in the rice. Add salt and pepper, Italian seasoning, basil and oregano along with the fresh garlic. Add garlic powder and a tablespoon at a time of Worcestershire sauce, until it starts giving the stuffing that strong flavor that Worcestershire sauce is known for. Add the cilantro.

Place the bell peppers inside a 350 degree oven. After 25 minutes of being in the oven, take them out, sprinkle them with more of the two types of cheeses (but, this time on top), along with the Panko bread crumbs, and put them back in the oven for 10 more minutes. Then, broil for 3-4 minutes or until the bread crumbs are brown and toasted.

And, voila! When you take them out of the oven, they should look a little something like this:

Who doesn’t love some melting, cheesy goodness? Best of all, if you have leftover stuffing that you couldn’t use for the bell peppers, you can always eat the stuffing the next day just like that. It really does taste that good. According to my husband, these stuffed bell peppers were amazing! I am sure they will be a hit in your home, too.

I love making energy balls because they’re nutrient-dense, portable, easy to make, and the perfect healthy on-the-go snack.  Especially now that we’re quarantining and working remotely at home, it’s more important now than ever to have some handy and wholesome snacks available.  Personally, I’m so laser-focused when I work from home, that I find it […]

A few weeks ago, I made my very first SCD cheesecake with blueberry compote and I’ve been in love ever since.  I was intimidated to make it at first but it was actually SO easy.  After many Google searches, I found this recipe that uses coconut flour as the crust, which I was thrilled about, […]

With the majority of us still quarantined at home and the summer weather on the horizon, I thought I would share this classic Shirazi Salad recipe with you all.  This salad is light, refreshing, and perfect for a hot day when you want to cool down and aren’t in the mood to eat anything heavy […]

Have you ever wanted comfort food but without the guilt and extra calories?  When my mom made me what I call beef and spinach pie last year, it tasted just like that.  It’s a relatively simple dish—just beef, spinach, onion, and eggs, but looks like a lot more labor and love went into it.  It’s […]

Okay, guys, I think this is seriously the closest we’re going to come to getting nachos on SCD.  The other day when I posted my Mini Bell Pepper Chicken “Nachos” recipe, someone mentioned that I should try making the nachos with cheese crisps as the chips, which was truly genius, because that’s just what I […]